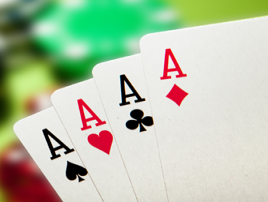 Early predecessors of the game of poker have been around for centuries, with poker able to trace its roots back to games such as those played by the Persians, and the German game Pochen and English game of Brag which incorporated an element of bluffing and were popular in the Middle Ages and Renaissance periods. These later developed into the French game of Poque, which was so popular that it spread throughout the other countries of Europe and found its way to America through the French settlers who established the city of New Orleans.


The exact origins of today's poker games are hotly disputed, but are no doubt the result of the combination of a number of similar yet distinct early games as cultures and nations interacted with each other.

Poker in the US

Despite its origins elsewhere, it is America and the USA which many people first think of when they think of poker players, thanks largely to popular Hollywood movies which feature poker in two of its most iconic locations: that of Mississippi riverboats and the Wild West.

Playing poker on riverboats become popular after laws were introduced in many American cities prohibiting gambling. Because rivers were not deemed to belong to a particular state but were rather a border between them, the same laws did not apply. The popularity of poker in New Orleans and on Mississippi riverboat cruises soon led to it spreading into neighbouring states.


Poker and Gambling in The Wild West

During the gold rush fever in areas such as California and the Klondike, gold mining towns soon sprang up to cater for the needs of those flocking to the area in an attempt to find their fortune. These towns were often hotbeds for vice with prostitution, theft and gambling being rife. One of the most prevalent ways to gamble was through poker, as it combined such an element of skill and subsequent bravado, popular amongst men of the age, which could not be attained through games of pure chance such as rolling dice or flipping a coin for example.

What of Poker Today?

In some ways poker is still struggling to shrug off this association with avarice and wrongdoing, with many people (and governments) still thinking that poker somehow must corrupt all those playing and lead to health problems and thievery.


The reality is that for the vast majority of people in the world, poker is a fun game which is not only enjoyed for its skill element, but also as a means to socialise with friends and family. It's beauty lies in the fact that it is not only a game which is simple to learn yet hard to master, but also that it can be enjoyed when playing for pennies or even for free using pretend money. It does not require a person to spend large quantities of money on equipment or club membership like some sports and activities, nor is there a requirement to play poker for high stakes and risk losing lots of hard-earned money to get enjoyment from the game.

The Spread of Online Poker

The dawning of the internet age has breathed new life into the game of poker and made it accessible to billions of potential new players. No longer is poker viewed as the preserve of intimidating casino card rooms or a game that needs to be played in secret around a kitchen table, but can now be enjoyed in the comfort of their own home by anyone of a legal age who has a computer and access to the internet.