Started to Bluff in a Poker Hand? Maybe Carry On! 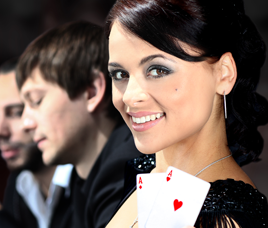 Bluffing is a key component in any game of poker involving real money which is why there are many who believe that poker which is being played for free or does not involve any real cash is simply not poker or, even more strongly, feel that it is a waste of time.


Wherever you stand on this debate, whenever real money poker is being played, bluffing is an important strategy and one which can either bring you much success when done right, and one which can result in an expensive failure if done incorrectly.

The Importance of Continuing with a Bluff

Although there are many factors which will result in a successful bluff such as the playing style of an opponent to the size of the remaining chips a person has at the table, one of the most common reasons for a bluff failing is when a person starts and then fails to carry on. Of course, they may be double bluffing and hoping to deliberately mislead their adversary, but more often than not if a person attempts a bluff and then falls back into checking or calling in subsequent betting rounds there is a fair chance that on the previous round when they were so quick to throw money into the pot they were trying to bluff everyone out of the pot and their hand is not quite as strong as they tried to mislead everyone into thinking.


Sometimes once a bluff has been started it is necessary to keep up the pretence by carrying it on into subsequent betting rounds to try and make opponents believe that you do indeed hold a strong hand and that the cards revealed by the flop, turn and river (if the game gets to that stage) have only strengthened it further. Constantly switching between raising, checking and calling gives off the impression that a player does not truly believe in their hand.


But as mentioned above, be wary as this may be a ploy by a wily player to deliberately give off this impression in order to sucker opponents into carrying on contributing to the pot! Nobody said playing poker was easy or guaranteed to win you money all the time!